Three days ago, Bitcoin joined global equities markets in a free-fall. Perhaps even more intriguingly, we saw abnormal distortions in derivatives markets before and during the crash.

I want to offer some observations about data that we collected here at Sixtant.

During the early morning hours of Thursday, March 12th, the futures contracts listed on BitMEX entered backwardation during a BTC price crash from ~7.5k to 6k on the perpetual swap market. 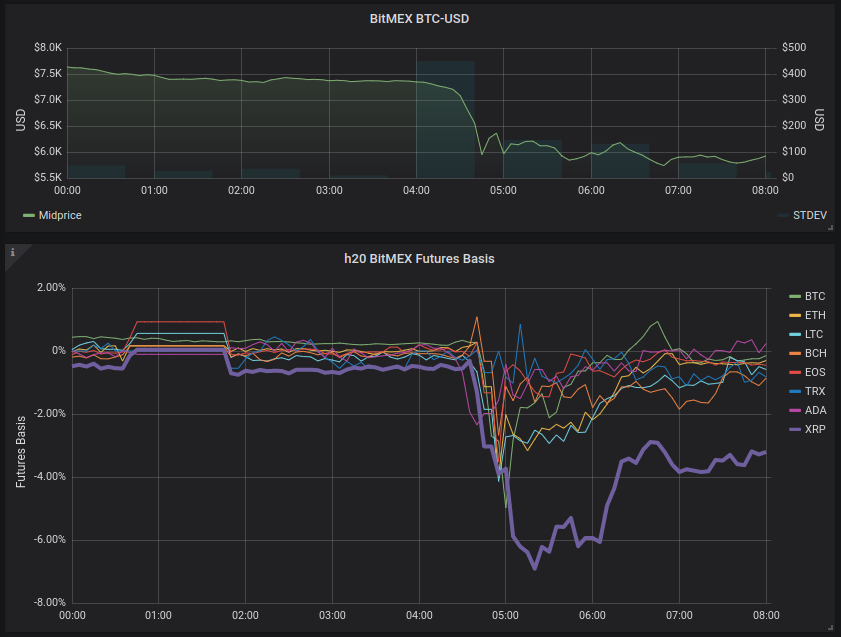 XRP futures for March 27th were over 6% cheaper than spot XRP for the better part of an hour.

Backwardation (or contango, its inverse) to this extent is not “normal” market behavior — arbitrageurs should step in to close the price gap between the futures and the spot.

Usually the balance of order flow here is between traders who want to go short (or long) with leverage during a big price movement and are willing to pay a premium to do so, and arbitrageurs who decide if the liquidity cost (or cost of carry) until the future’s expiry is worth the premium. During price drops these traders tend to go short, and in price jumps they go long.

One can only speculate as to why this market distortion persisted in the first place, but a possible answer is that there are less traders prepared to arbitrage a future in backwardation, since the trader needs to already own the spot asset.

In contango, on the other hand, the arbitrageur only needs the settlement currency of the future, since they cover by buying the asset on the spot market, rather than selling.

So when speculative market participants go long, arbitrageurs step in to keep prices in equilibrium, but when the inverse happens in such a precipitous crash, there are fewer participants who can provide liquidity.

This is more of a hypothesis than a proven effect, but there is a narrative here that presents an explanation for how this price crash and backwardation may have made the global market, not just BitMEX, more fragile and set the stage for the rest of the day. 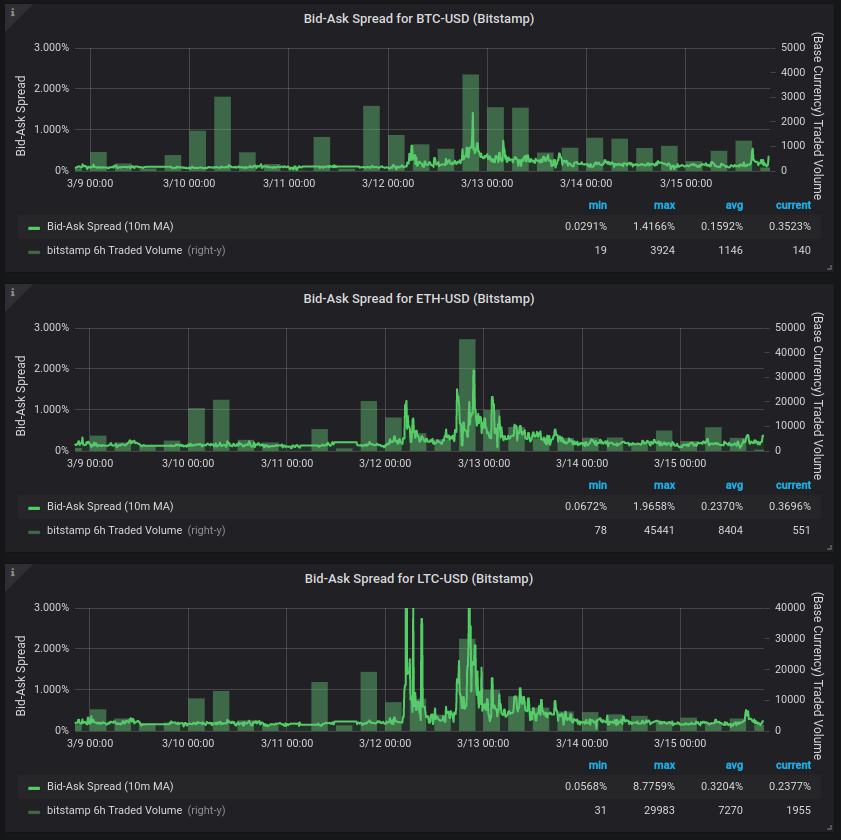 The first component is that such backwardation may have caused market makers to reduce their position sizes, removing a significant amount of crypto liquidity from the global market early in the day.

Traders (speculators as well as market makers) often create synthetic positions to allow them to trade assets they don’t own without the price risk. For example, you might have an inventory of 1 BTC and a desire to trade XRP, in which case you could use 0.5 BTC to short XRP futures and the other 0.5 BTC to buy XRP on a spot market.

Market participants had most likely created their positions by shorting futures at a premium of 1-3%, but thanks to the backwardation in the morning they were now seeing an opportunity to close their short positions several percentage points below the spot price.

Such extreme backwardation doesn’t usually last, so traders probably rushed to close or reduce their positions early in the day at a healthy profit, with the expectation of reopening them when the futures reached par with spot markets. However, the futures basis stayed mostly negative throughout the day.

The second liquidity reducing dynamic is that, in that same way that some traders were incentivized to take profit on their short futures positions, anybody who was long began to worry about liquidation.

These might have even been the same traders, since in many cases (certainly on BitMEX), unrealized P&L is not counted toward the cross margin collateralizing other open positions.

It’s possible that many of the open long positions — at varying levels of leverage — in the USD quoted BTC futures were used to fabricate dollars in the same way that short positions are used to create crypto. Prudent traders seeking to mitigate their risk of liquidation would have reduced or closed their open positions, thereby removing dollars from the order book as well.

Later in the day, liquidations on BitMEX sent the spot price into a free-fall and pushed the BTC futures more than 15% into backwardation. 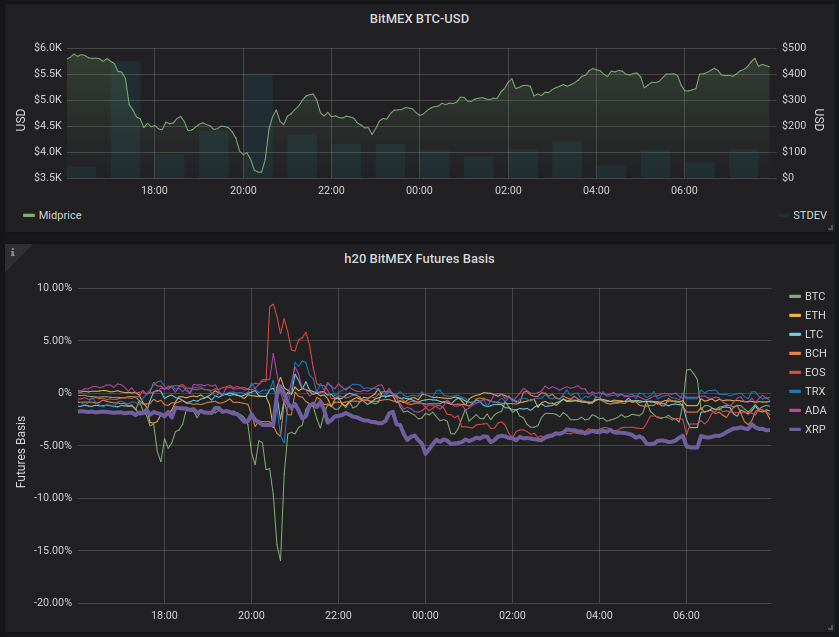 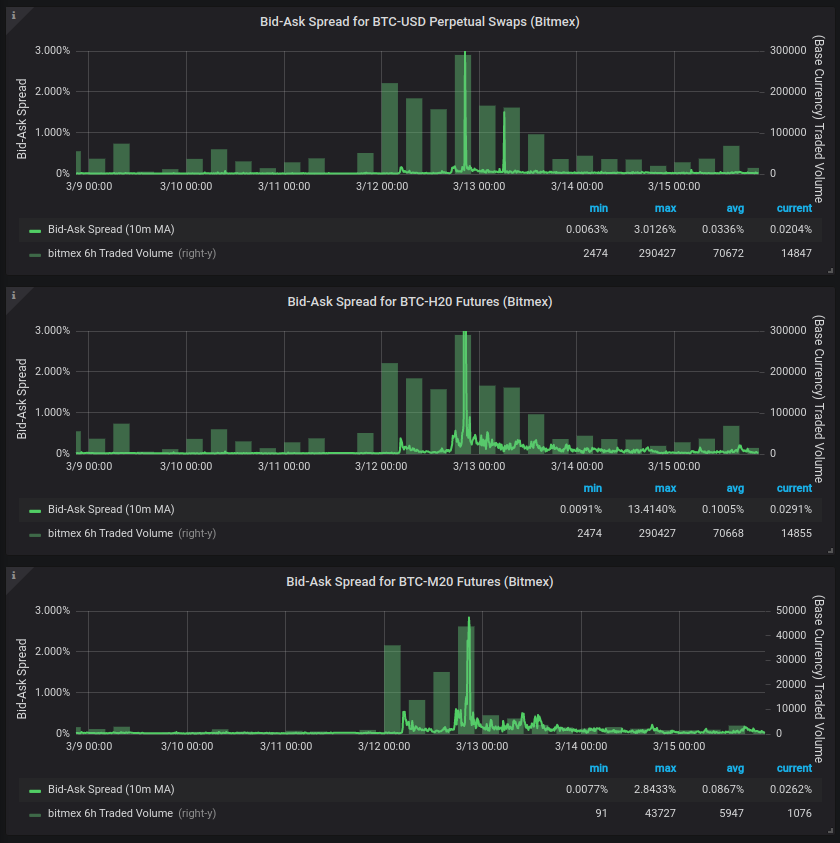 Though BitMEX's average bid-ask spread is much lower than Bitstamp's, the extremes reached during the liquidations were impressive. Check out the "max" value for the H20 futures, it's 13.4%, and that's for a 10 minute moving average!

The standard explanation for events like this goes something along the lines of: liquidations on platforms like BitMEX are self-reinforcing. Long positions are liquidated via market dumps, which not only puts downward pressure on that order book, but on the global market as well. Since price discovery happens on BitMEX, arbitrageurs buy there and then dump on other spot markets, sinking the price globally. Since crypto markets exhibit nominal rigidity (price “stickiness”), the subsequent drop in price on spot markets is not followed by a correction, but instead serves only to affect the indices used for marking the swap and futures products, perpetuating a cycle of liquidations.

This could certainly be true, and without mutual accountability between counterparties, a margin call system isn’t viable, so it’s hard to imagine what structural changes could be made to improve the situation.

At the same time, I’m fascinated by the extreme futures backwardation that preempted the evening’s price crash. Maybe it’s just good old human apophenia, but I have to think that there’s reason that the headline here was “Bitcoin Price Crash” and not “BitMEX Flash Crash”.

Who knows though, maybe some gargantuan fund out there was selling BTC a little too exuberantly to make margin for leveraged positions in equities, and the lesson is to not even try to explain the emergent properties of complex systems.